Food and beverage professionals around Central Arkansas have taken wide and varying paths to get where they are today. Some went to culinary school, receiving professional training and learning in the safety of the classroom. Others started as dishwashers or busboys and worked their way up the ranks in the kitchen. And still others decided to start their own business and open up a restaurant or bar with little professional experience to speak of. And then there’s Nathan Greubel, the newly minted head brewer of Diamond Bear Brewing Company. Only a few months ago, Greubel was an engineer and a home brewer, with some self-taught skills and know-how. Now, he leads one of the biggest breweries in the state, overseeing a 30-barrel system that creates beer for one of the most well known labels in the region.
“My buddy saw the opening online,” said Greubel. “And I talked to my wife about, you know, what would happen if I actually got it, and she said, ‘Well, let’s try and see.’ And I got it. It’s a great job, I really like it a lot.”
Greubel started home brewing around eight years ago when a few of his friends took up the hobby. He loved brewing from the start, but it took a couple of years to get the hang of it. Greubel built his own system at home and began experimenting with different styles and flavors in his brewing. Still, he is first to admit that home brewing and professional brewing are very different.
“The biggest challenge is making sure I have all the steps right, that I don’t forget anything,” said Greubel. “I mean, you make one small mistake, that’s it. It’s a lot of money down the drain. It’s not as big a deal when you’re a home brewer. So staying focused, not getting distracted, that’s my biggest challenge.”
Greubel’s biggest focus is keeping Diamond Bear’s flagship brews reliably consistent. Brews like Pale Ale, Irish Red and Two-Term Presidential IPA have to be made the same way every time. However, he also has plenty of leeway to experiment, especially with the brewery’s small batch series, which started under former head brewer Jeremy Whitehead. Here, you might see a barrel-aged brew, or a pale ale made with Hefeweizen yeast that has been fermented with tamarind. And of course, Diamond Bear’s new cult favorite Stripper Sweat, which sold out in its first release in 14 minutes. It was Greubel’s job to bring it back. 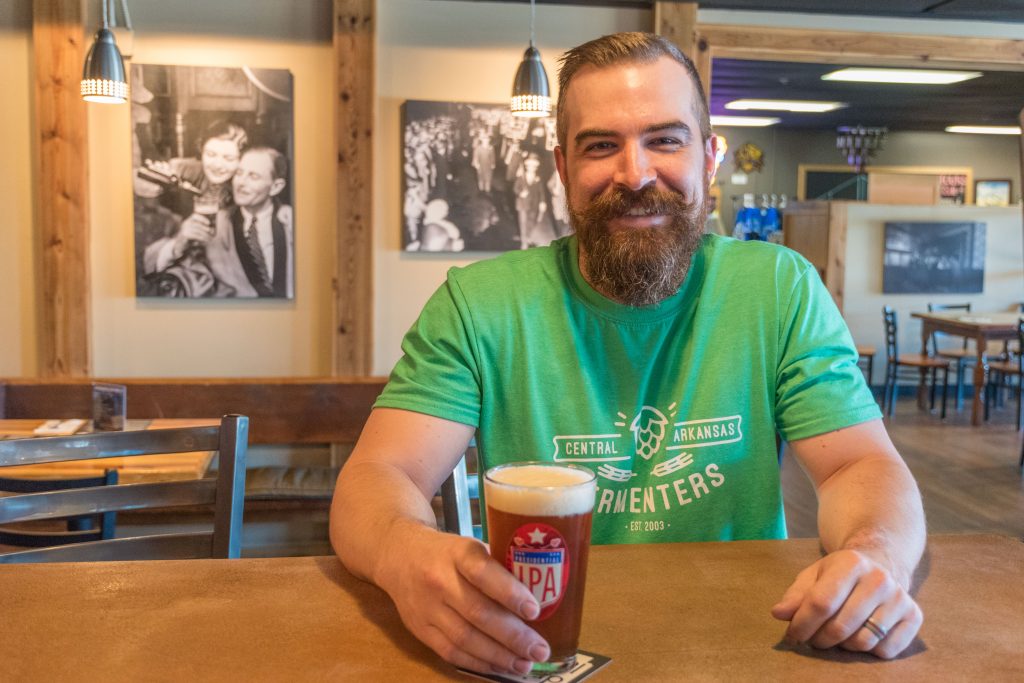 “We needed a good light, easy-drinking beer,” said Greubel with a chuckle. “We didn’t want to do a kolsch, which is what we did last time. So I played with the recipe, and we had some ingredients that we needed to use. I played with some mango and passionfruit purees, and decided to go with a summer ale. I did a six-gallon batch of it, and everybody loved it. So we went with it.”
Greubel is still working on learning his new system and the beer industry as a whole. However, he expresses confidence that he has what it takes to maintain Diamond Bear’s status in the region and to grow local fans with a combination of steady, traditional brews and some new, exciting small batches.
“It’s good, consistent beer, very classic styles,” said Greubel. “I know our small batch stuff dabbles in some funky flavors and themes, but if you like good, traditional beers, that’s what I do best.”