It feels great to get back into the routine after a couple weeks of traveling. @petitandkeet has a great pasta bolognese special tonight, and their new cocktail menu is 🔥.
You all are going to love @camp.taco when it opens next week. The Yellow Rocket team has done a fantastic job. Can’t wait to tell you more about it. Pro tip though, get the spicy Mexican ramen.
We may or may not have snuck in a few early bites of wedding cookies and baklava from this weekend’s @greekfoodfest. You can get yours tomorrow, but be sure to order ahead before they sell out.
Get your tickets for Rock City Popup with @eat_lilis at @communitybakerylr next Thursday, October 7th, at 6.
Get your tickets for Rock City Popup with @eat_lilis at @communitybakerylr next Thursday, October 7th, at 6.
Loving these chilaquiles on the @hillstationhillcrest brunch. This needs to be a regular Sunday stop.
Join us as we find out just how some of the best local brews, drinks, and spirits are made. Our first stop includes chatting with Phil Brandon of Rock Town Distillery, and delving deeper into the process of making one of his personal favorite products – The Rock Town 3 Year Old Arkansas Straight Bourbon Whiskey.
Positioned at the front of the distillery house alongside a sleek bar, Brandon first wants to dispel the many misconceptions that surround bourbons. He says, “Bourbon is a type of whiskey … the details of how and where a whiskey is made will ultimately point to what it’s called. Basically, bourbon is defined as a whiskey made from 51 percent corn, aged in a new charred oak barrel, and made anywhere in the US – not just Kentucky.”
In other words – don’t let the naysayers tell you otherwise – it is perfectly legitimate for Rock Town to produce their own bourbon. The overall process for their 3 Year Old Bourbon takes – you guessed it – three years. 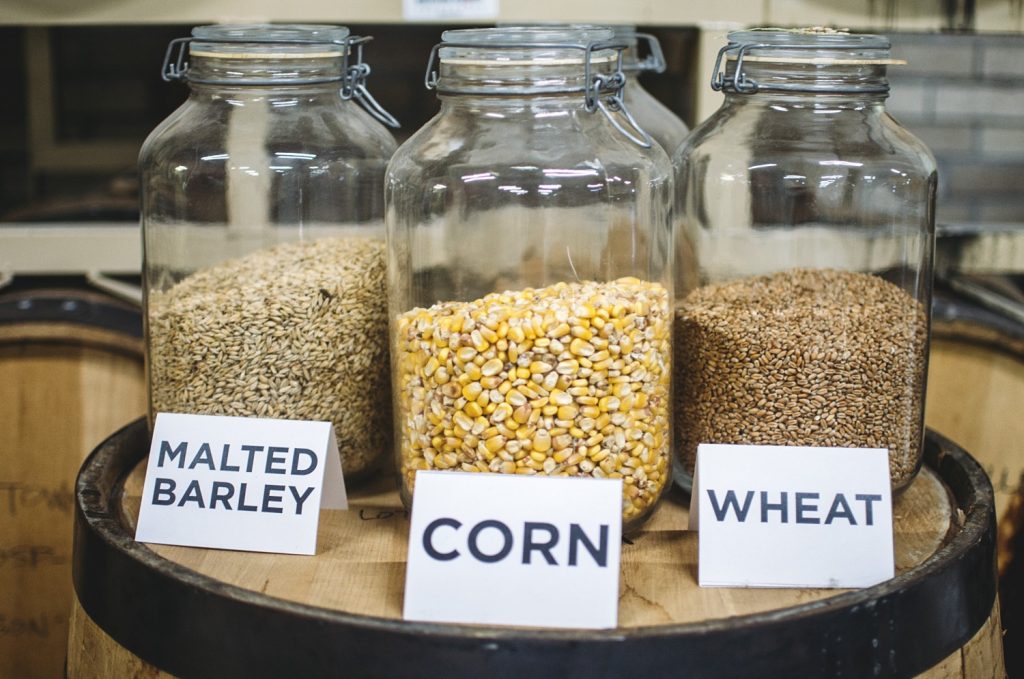 Brandon starts with corn, wheat, and malted barley. The ratio comes down to 82 percent corn, 9 percent wheat, and 9 percent malted barley. Coming up with the ratios, among other things, was a process.
“We have tried several different things over the years to get to where we are today. I’m sure people will agree that our offerings today are better than when we started five years ago. We are a craft distillery, and we are always practicing our craft,” he explains.
The three are added together and mixed in with heat and water creating a mash.
The malted barley acts as the engine, converting the starch in the grain to fermentable sugars which make the production of alcohol possible. “If you made the mash without the malted barley,” says Brandon, “nothing would really happen.”
As it is, it takes about three and a half hours to get the mash just right. Once it has cooled, yeast is added, and the mash then is ready for fermenting, which takes three days. Up until now the process is pretty similar to brewing beer, although there are some key differences, as Brandon points out.
“The mash we end up with is different from beer. We don’t separate the grain from the liquid, and we ferment with the grain,” he explains. 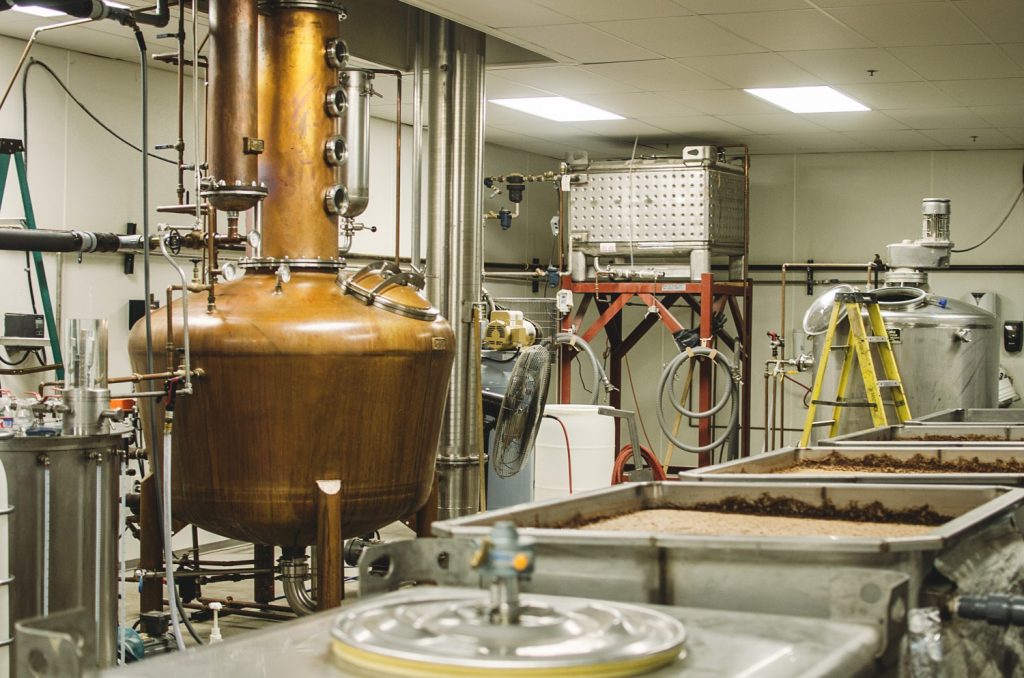 The team then distills the mash through what is called a stripping run in their copper pot still. The stripping run ensures that alcohol is distilled out of the mixture. After four stripping runs, he then takes the resulting alcohol and runs it through the still once more, so that the liquid or “spirit” is distilled twice.
“This is when we separate the heads from the hearts and tails,” he explains. In other words, it’s time to make the cuts. The alcohol produced through the process so far does not only include ethanol, the type of alcohol you know well and love to drink. Other harmful and potentially poisonous alcohols are present including acetone and methanol, among others. At this stage the alcohols are sorted out, the hearts containing the ‘sweet spot’ are kept, while the heads and tails are weeded out.
Next up is the aging process, which involves barrels. Brandon gets his barrels from Missouri, Kentucky, and Arkansas, when he can. To continue the 3 Year Old Bourbon’s production process, he fills up a 53 gallon barrel, and then sits back and waits. He laughingly says he may or may not be a more patient person since getting into the distilling business.
Brandon says he probably enjoys “filling the barrels and then emptying them again” the most out of the whole process. The aromas that come with this task can be extremely pleasant. 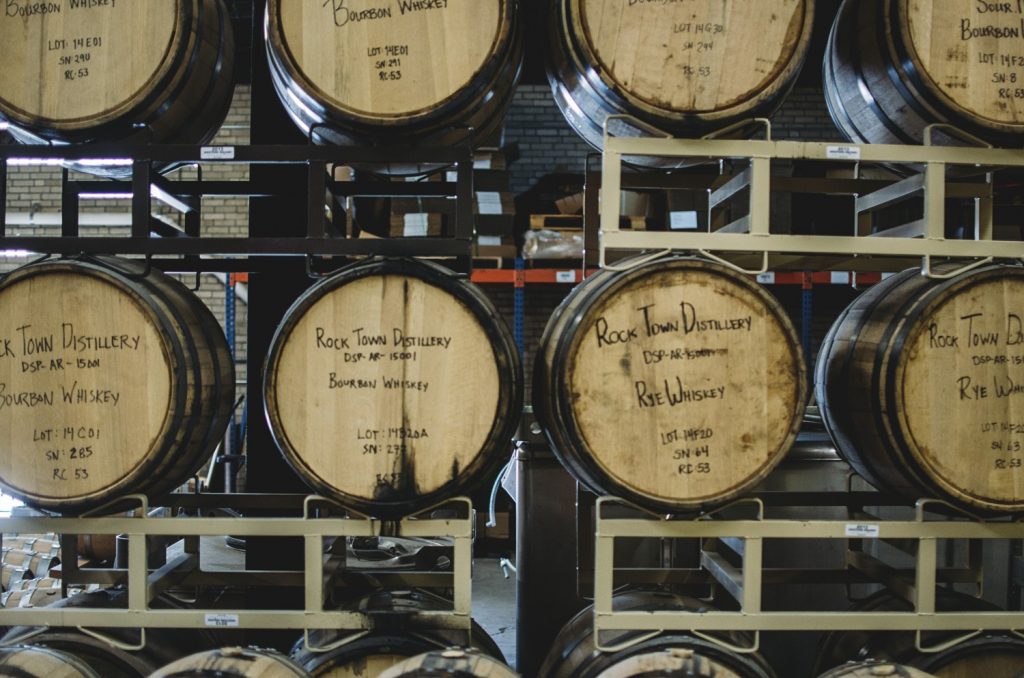 He’s also especially careful of the foods he eats when it comes time for product tasting – “I like to keep my palate even so I can be on my game to pick a bourbon for bottling.”
Once the 3 Year Old Bourbon is taken out of the barrel, it’s filtered, bottled and ready to put on the shelf. Brandon says, “I like to enjoy this one neat, although it’s pretty good in an old fashioned or whiskey sour.”
At 92 proof or 46 percent ABV, the final result is a reddish, delectable spirit that smells slightly of dark chocolate. Its taste profile includes smooth milk caramels finished off with a mild, dry vanilla flavoring.
If just reading about the bourbon gets you fired up, be sure and stop in to Rock Town Distillery for one of their tours offered daily – there’s a tasting at the end you won’t want to miss. 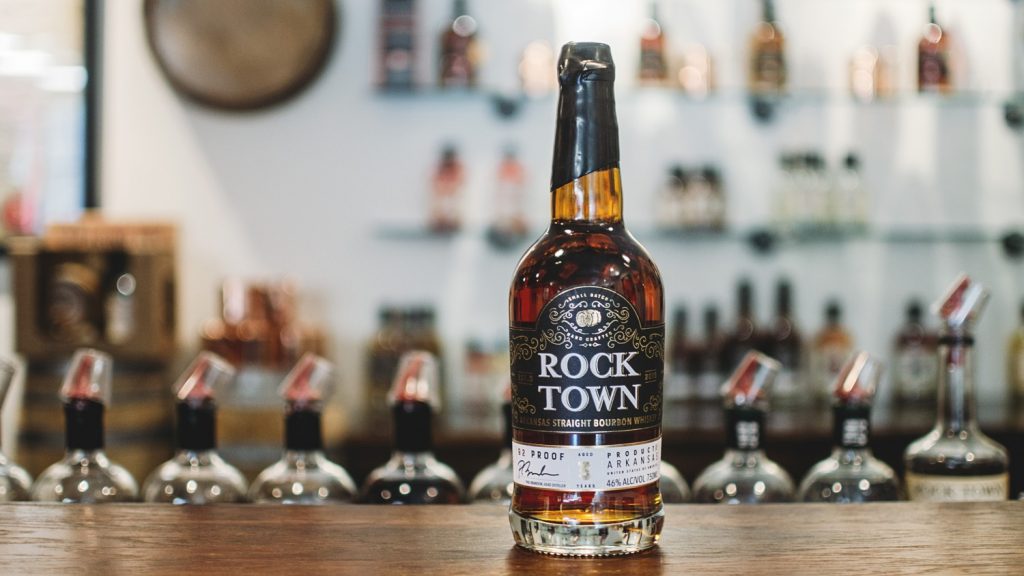