First Look: Blaze Pizza Is "Fire'd" Up To Serve You, Little Rock

You’ve heard the saying before. That pizza is like sex…that even when it’s bad, it’s still pretty good. It’s generally true. Blaze Pizza opened its doors to an enthusiastic and hungry public recently in the Pleasant Ridge Shopping Center in West Little Rock off Cantrell Road. On opening day, they offered free pizza to anyone who walked in and could prove that they were following Blaze on social media. From what I hear, the lines were insanely long…trailing out the door and down the block most the night. I was not there, but I’d heard decent reports about the place. So I dropped by recently so see what all the fuss was about.
Blaze has been lovingly dubbed the “Chipotle of pizza”…and for good reason. It markets itself to that youngish, millennial crowd, yearning for something a bit better than Pizza Hut without all the pomp and circumstance of a significantly higher quality pizza outfit. Blaze uses the fast-casual “Chipotle model” of “build it your way, right before your very eyes”, as well…a strategy somewhat unique to the pizza business.
They basically offer individually-sized 8-inch pizzas, so each customer chooses exactly what they’d like without the entire table be subjected to a single gigantic pizza to split. Diners may choose from one of their “signature pizzas”. Among the numerous options, there’s the “Green Stripe” with pesto, grilled chicken, red peppers, garlic, and arugula. And there’s the “Link In” with Italian sausage, red peppers, and onions.

Or you can get creative and “Build Your Own” pizza and choose just about any ingredient you’d like for your pie…all for one set price of around $8 (that’s the big selling point). There’s a good selections of meats (bacon, meatballs, chicken, sausage, salami, pepperoni), and number of veggies, several cheeses (goat, gorgonzola, mozzarella, parmesan, ricotta), and a handful of signature sauces (red, white cream, pesto, barbecue sauce). There’s a lot that can be done with that number of options. Pile it on however you’d like…it’s all the same price. Whether or not your combination of ingredients is successful is really up to you at that point. I definitely saw some folks there taking advantage of the “free toppings” schtick.
The line moves fast. You walk down the counter (much like Chipotle or Subway) and the pizza makers assemble your pie in front of you as you point and choose the ingredients you’d like. At the end they throw it all in a large gas-fired oven that cooks the pies in about 3 minutes. They’re thin pies and come out fairly crisp, but not so much you can’t fold them if you prefer it that way.
The restaurant is clean, bright, and roomy with some outdoor patio seating, as well. It’s built for efficiency and the concept works well. Without much of a line, a person could get in and out in under 30 minutes easily.
I suspect that given the location, price-point, and a decent-quality product, Blaze Pizza will do fairly well in this area. Don’t go in expecting Zaza-level pizza, and you’ll probably come out satisfied.
Blaze Pizza – Little Rock: 11525 Cantrell Rd., Little Rock, AR 72212. Hours: Open daily 10 am to 10 pm. (501) 312-1117. 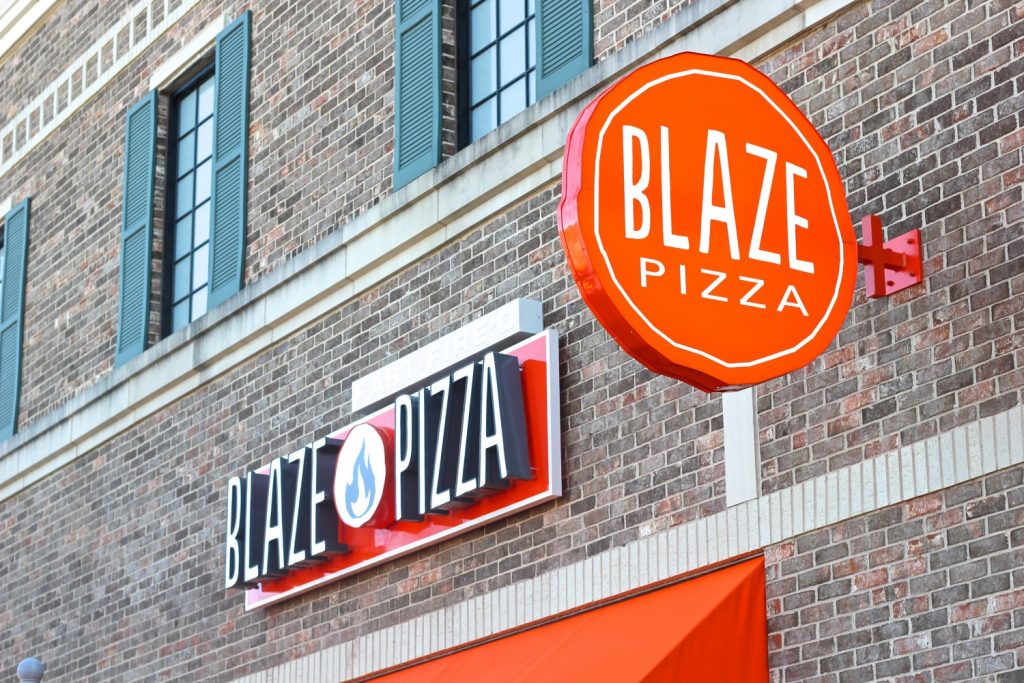