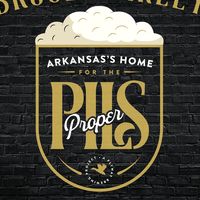 It is good to get out of town town for a couple of days to @visithotsprings. @steinhauskeller was good as always.
A little date night @lrstarofindia is the way to go. Always one of our favorite spots.
Sometimes you have to sit back and appreciate the finer things in life. Like driving out mid week to grab a box of fresh strawberries from @barnhillorchards in peak season after a week of good rain.
Starting this week @mockingbirdbarandtacos is back open for lunch. Head out and make yourself a happy plate like we did today.
The house-made pasta at @raduno_lr is one of the best meals around. Thankful to have chef @collector_cash and his kitchen crew in @soma_little_rock.
Stopping in to visit our friends at @pinkolive, what a fantastic addition to @soma_little_rock. Go visit when you have a chance.
At any other time, opening a new restaurant would still be difficult. The restaurant industry is among the hardest in the business world, requiring both acute business sensibility and plenty of artistry to succeed. But opening during a pandemic represents an even greater challenge and more risks. That is the task facing the team of Brood & Barley in North Little Rock’s Argenta neighborhood. The new Flyway Brewing gastropub swings open its doors tomorrow to perhaps the most uncertain environment restaurants have ever faced. However, after stopping in for a first look, it’s apparent that Brood & Barley is as positioned for success as it possibly can be.
Brood & Barley’s roots at Flyway Brewing are strong and clearly demonstrated. The former Core Public House space is designed with beer in mind, from the molding adorned with handpainted barley leaves to the simple, elegant dark-wood accents that call to mind some of Europe’s venerated pubs. So much work as gone into making the room look effortless. The space is beautiful but not stuffy. It is meant to be enjoyed by the eyes for a few minutes before your beer and food arrive, both of which promise to be special.
First, the beer. Flyway is putting several beers on tap at Brood & Barley that you won’t be able to get anywhere else, including at the Flyway taproom just down the street. While you can still get traditional Flyway beer in cans, at least nine taps will feature mostly new pours (some were released at Flyway in small-batch cans during the shutdown). They include a monster Barrel-Aged Barleywine (13.6% ABV) and Guava Pastelito, an 8.7% golden pastry stout. But the highlight is the Proper Pils poured from a slow tap. For those who have never tried this, a slow tap is a device that pours beer extremely slowly, aerating and oxidizing it as it goes. The result is a silky smooth mouthfeel and a wide-open nose that expresses more aroma than you’re used to from a pilsner. It will also take up to seven minutes to pour, so be ready to wait.
“[Flyway co-owner] Jess [McMullen] first told me about this, and I said ‘You’re crazy,’” laughed bar manager David Burnette. “You’re going to make me pour five-minute beers? But we have a good system where we can stagger it and get them out in good time, and the experience is beautiful. It’s all I want to drink right now.”


Of course, fans of the Central Arkansas food scene will recognize Burnette as one of the best barmen to ever pour in the Little Rock area. After some stops managing at Ciao Baci and Table 28, Burnette is back behind another beverage program. Some cocktails you will immediately recognize, such as the Cheerwine Swizzle and Dave’s Old Fashioned from his South on Main days. There are also some new hits, including the Dogtown Toadstool made with truffled cognac and mushroom syrup, and the beautiful Bananenstånder, which features banana liqueur and a shaken egg white.
“It might not be a typical bar,” said Burnette. “We can make every basic drink, but we won’t have ten gins. I might only have two. But we want to make those drinks well, and when we do create interesting cocktails, we want them to be distinctly ours. We wanted to tie our beer identity into it, but we didn’t want this to be a ‘beer cocktail list’.”

While you may be familiar with Burnette’s work, Brood & Barley introduced Central Arkansas to a new kitchen talent. Brayan McFadden, McMullen’s cousin, has come to North Little Rock from Philadelphia to run the kitchen. His talent is immediately evident. When I arrived, McFadden quickly whipped up a couple of appetizers that he had not prepped for, and both were excellent. His Deep Fried Olives come stuffed with pimento cheese and served with lemon aioli. They were delicate and deeply flavorful, and clearly devised with plenty of thought and finesse. And Brood & Barley might start with some of the best duck wings ever served in Central Arkansas. The Tribute Wings come fried to a perfect crisp and tossed in a sweet chili sauce with a little housemade ranch.
“It’s the dream of everyone who opens a kitchen, that you want to do your own food,” said McFadden. “You want to do your own food that makes you happy, and hope that it makes everybody else happy, too. That’s a big push. We’re not going to have classic Southern stuff, there will be some twists here and there, but I think you’ll recognize everything.”

Being from Philadelphia, McFadden was determined to bring two food staples from his hometown to North Little Rock. The first is steamed mussels, which Brood & Barley will serve by the pound in one of three variations (see menu below). The other is the classic Philly Cheesesteak sandwich, and I have no doubt this will sell out often in the coming weeks. It is a Whiz Wit-style cheesesteak, with fried onions and cheese sauce on a bed of shaved ribeye. And McFadden is also bringing something to Brood & Barley that is very personal.
“I always talk about, what’s your death-row meal?” said McFadden. “Mine is my dad’s meatloaf, macaroni and cheese, and stewed tomatoes. I’ve been dying to put it on a menu, I’m super excited about that dish and can’t wait for everybody to try it.”
Of course, safety will be at the front of everyone’s mind as Brood & Barley opens. The team will be spacing out tables and requiring masks until the food or drink are served. Also, Brood & Barley will be available for carryout; be sure to call well in advance in case this proves to be a popular option. And from what I’ve seen and tried, I believe Brood & Barley will be a very popular Argenta destination. It’s open for lunch tomorrow, and I believe it is well worth checking out.
[gview file=”https://www.rockcityeats.com/wp-content/uploads/2020/06/Menu.pdf”]