It just became a lot easier to grab a small piece of The Big Easy in central Arkansas. Any trip to New Orleans is incomplete without a visit to one of the city’s famous beignet shops…Cafe du Monde or Cafe Beignet, for example. These temples of fried dough and sugar have been serving up classic New Orleans flavor for decades, and their beignets are sorely missed by Louisiana transplants that have found their way to Arkansas.
But thanks to Rick Rogers, folks can now snag some respectable beignets from his new food truck that only recently began serving in Sherwood. Rick’s Beignets is a small purple, green, and gold trailer camped out near the Indian Hills Shopping Center just off highway 107 on Country Club Rd. He’s got a small menu, essentially limited to beignets and coffee, but he’s doing things right, and for beignet fans…it’s definitely worth your attention.
Rogers grew up in southern Mississippi and spent summers with his relatives in New Orleans. He later returned to NOLA for college and says he loves the city dearly. “In my soul, it’s my home, if that makes sense,” he says. After joining the military at age 18, he found himself moving around a lot, in several different countries and numerous states in the U.S., but he feels that his “mind and soul were always in New Orleans.” But having also fallen in love with Arkansas, after retiring from the military earlier this year, he decided to settle down in The Natural State…and naturally, he missed the beignets he grew up around. His new truck is an effort to bring Arkansas an authentic taste of New Orleans…great beignets and hot coffee, without the 7 hour drive. 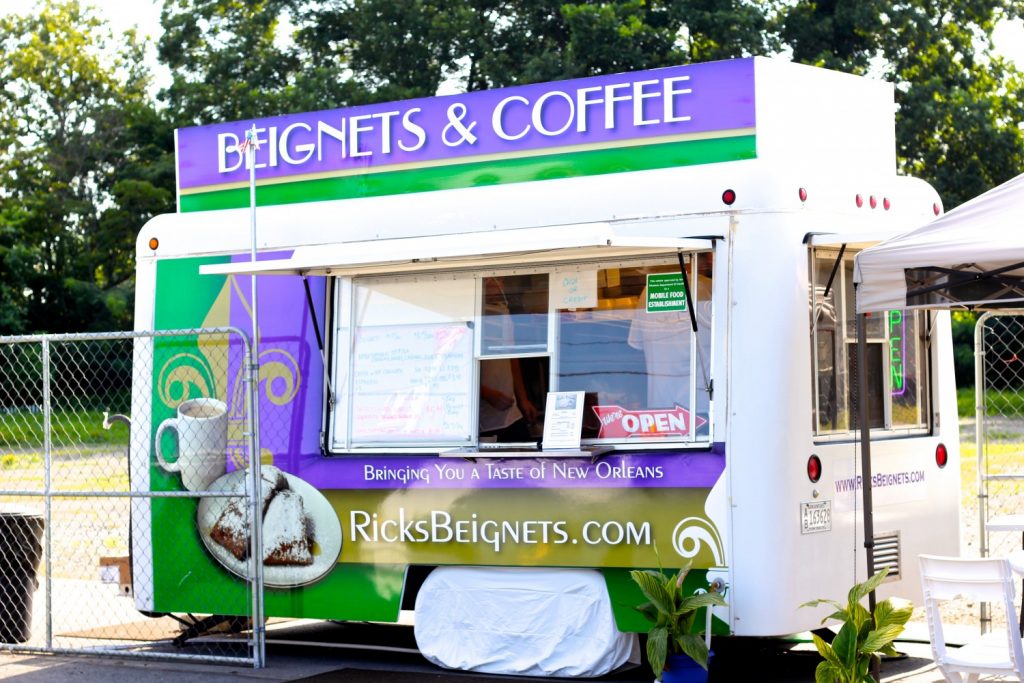 Rick’s Beignets sells these hot fried pastries individually (for $1 a piece) or by the dozen (for $10). Each hot square comes covered with powdered sugar, but may also be topped with any number of items such as honey, chocolate, strawberry, or caramel. Rogers says his beignet dough is unique because it’s a bit flakier than most traditional recipes. But after experimenting with about 16 different recipes, he settled on the one he’s currently serving. “I purposefully did not want to be a clone of Café du Monde and wanted something different, but better, if at all possible,” says Rogers.
There’s also a couple savory beignet options…something a bit unexpected, but Rogers sees beignets as “a platform to build unique culinary items.” He’s doing a “Buffalo Chicken” beignet slider with strips of spicy chicken, sweet and spicy mustard, pickles, and smoked provolone. His “Ham & Cheese” slider is “evocative of a Monte Cristo,” says Rogers, and he prepares it with smoked ham, baby swiss, and a dab of mayo.
He’s pouring Community brand coffee…their “Breakfast Blend”, a “5-Star Hotel Blend”, and another “Dark Roast” variety. Rogers says, “I chose Community because it’s what was served at the original Copeland’s on St. Charles and Napoleon Boulevard (before it burned down) where I worked during college.” He’s also doing espresso, serving Gevalia Espresso roast.
Rogers says if things work out, he’d eventually like to plant beignet trucks all over the city…but that’s a ways off at the moment. He does plan to serve New Orleans-style gumbo and red beans and rice once the weather starts to cool.
I was able to drop by Rick’s Beignets this past weekend and left very impressed with the food these guys are putting out. Be sure to try the beignets topped with honey and powdered sugar…my personal favorite.
It’s quick and affordable, and everything is made to order…it’s worth a trip to Sherwood to see what they’re churning out.
Rick’s Beignet Truck: 118 Country Club Road, Sherwood. Hours: Monday to Saturday 6 a.m. to 1:30 p.m. Closed Sunday. Debit and credits cards/cash accepted. (501) 400-3838. ricksbeignets.com