Food, Drinks, and Music Make Jazzlights in the Park a Success

The 2015 Jazzlights in the Park Festival, held May 16 at the Clinton Presidential Center Lawn, had a little something for everyone. The main event of the day was the talented lineup of accomplished jazz musicians and jazz bands.
Starting things off for the festival was a great performance from the Boys and Girls Club Jazz band. The boys and girls in the band were all impressive instrumentalists showcasing great control and range of their instruments. The band played several covers and seemed to enjoy being the stars of the day on a day meant to raise support for their organization.

Next in the line-up was the appropriately named That Arkansas Weather, who like many on Saturday, were in for a day filled with periods of rain showers and storms.
The Ted Ludwig Trio, Twice Sax and TP and The Feel all showcased their talents on the Main Stage, while Bonnie Montgomery and Friends performed three sets in the Beer Garden.
Rodney Block, Amasa Hines and headliner Jonathan Butler rounded out the final performances of the night on the Main Stage.
Throughout the day, another event took place, The Big Tamale contest. The event, which featured a fan-voted winner and a professional winner judged by Chef Donnie Ferneau, was comprised of three teams. 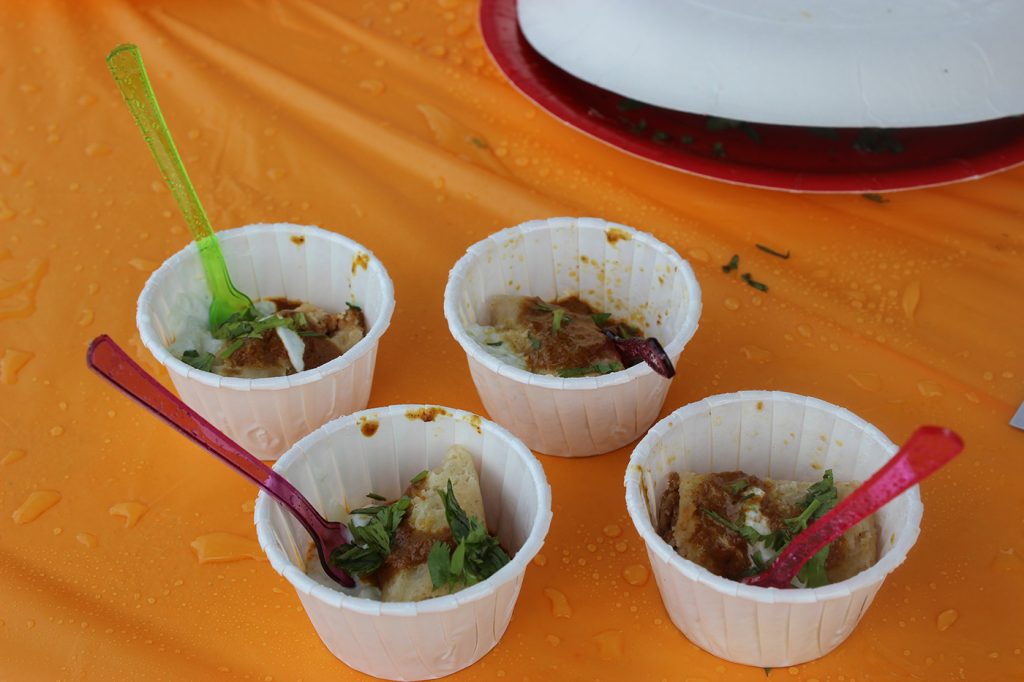 Team number one, Bali Tamales, was a husband and wife team of Pat and Michelle Snyder.
“I’ve made tamales for a decade on and off,” Michelle Snyder said. “I don’t do them in volume like this. Ever. Just for the family.”
Michelle started on Thursday and cooked for what she said was hours upon hours. On Friday, she tore the tamales apart, applied more seasoning, chopped them up and made the filling. On Friday, they prepared the tamales, making about 100 in total. The finished product was a sweet and tangy treat with hints of Indian spices.
“We will gladly be re-donating, if we do win, and send the prize money back to the Boys and Girls Club of Central Arkansas,” Michelle said.
Team number two, Pat’s Kitchen, was a family team that was serving up a friend’s tamale recipe for the public. When asked what sort of ingredients were in the tamales, Pat could not divulge.
“I’m really not sure exactly how he does it. He doesn’t even share [how he does it] with me,” Pat said.
The tamale was a traditional corn-based tamale with a heaping pile of hot chili smothered on top.
After trying the tamale, Pat approached me with what he called his version of the tamale, which was a deep-fried incarnation of the traditional tamale. Pat’s tamale, which he said is corn meal-based, was also topped off with a pile of chili.
The third and final team, represented by The Clean Eatery food truck, was one of the most impressive tamales featured during the day. Owner Ryan Merritt-McGehee, who said has never made a tamale in his life, was taking on the challenge of making a “clean” tamale.
“So, how do you make a tamale without putting any corn in there? Garbanzo beans and gluten-free read crumbs,” Merritt-McGehee said.
“We’ve got a thick paste and we can add any flavor we want right into that paste. So, we can start with that and we are leading off with chipotle chicken,” he said.
The tamale is topped off with one of The Clean Eatery’s secret sauces, a honey-lime base with smoked chipotle and cilantro.
The results were excellent. The tamale had a nice kick to it with the chipotle and cilantro sauce.
After trying Merritt-McGehee’s tamale, it was time to wash down the spices with a cold brew.
There were so many options for local beer in the Beer Garden that it was impossible to pick just one. The Beer Garden was truly a “who’s who” of the Little Rock craft beer scene.
Lost Forty, Flyway Brewery, Stone’s Throw, Damgoode Pies, Moody Brews, Vinos and Diamond Bear representatives were all on hand to serve up great tasting local beer.
In addition to The Clean Eatery, a few food trucks were on hand, anchored by Loblolly Creamery. A number of delicious sweet treats awaited all of those sampling the delicious tamales. The Haygood BBQ truck was also on hand, providing tasty, hickory-smoked meats.