Love some @certified_pies. Some of the best, most unique pizza in the state, and amazing wings as well.
These tuna poke nachos from @hillstationhillcrest are easily our favorite appetizer in the city. Absolutely delicious.
The new cocktail menu over at @raduno_lr is fire 🔥🔥. Try the Spice Girl.
This Thai chili/coconut shrimp steamed bun from @lowivycatering on the November menu is outstanding. Might be second best only to their lobster roll. Go get you one.
It feels great to get back into the routine after a couple weeks of traveling. @petitandkeet has a great pasta bolognese special tonight, and their new cocktail menu is 🔥.
You all are going to love @camp.taco when it opens next week. The Yellow Rocket team has done a fantastic job. Can’t wait to tell you more about it. Pro tip though, get the spicy Mexican ramen.
“The best experience I’ve ever had in a coffee shop was when I enjoyed a very good coffee and a good pastry or when I went to a bakery and they had a really good cappuccino,” Stephanos Mylonas said on a late afternoon in July at Mylo Coffee Co., the coffee shop and bakery that he started nearly three years ago in Little Rock.
Stephanos, the owner and head baker at Mylo Coffee Co., has called Hillcrest home since 2014, after spending the better part of two years relying on a coffee cart to bring their signature pastries, baked goods and coffees to the masses.
“Our space is a space where somebody can spend anywhere from a minute to three or four hours just enjoying people watching and indulging in our drinks, or our food, and we really wanted to do both,” he said. 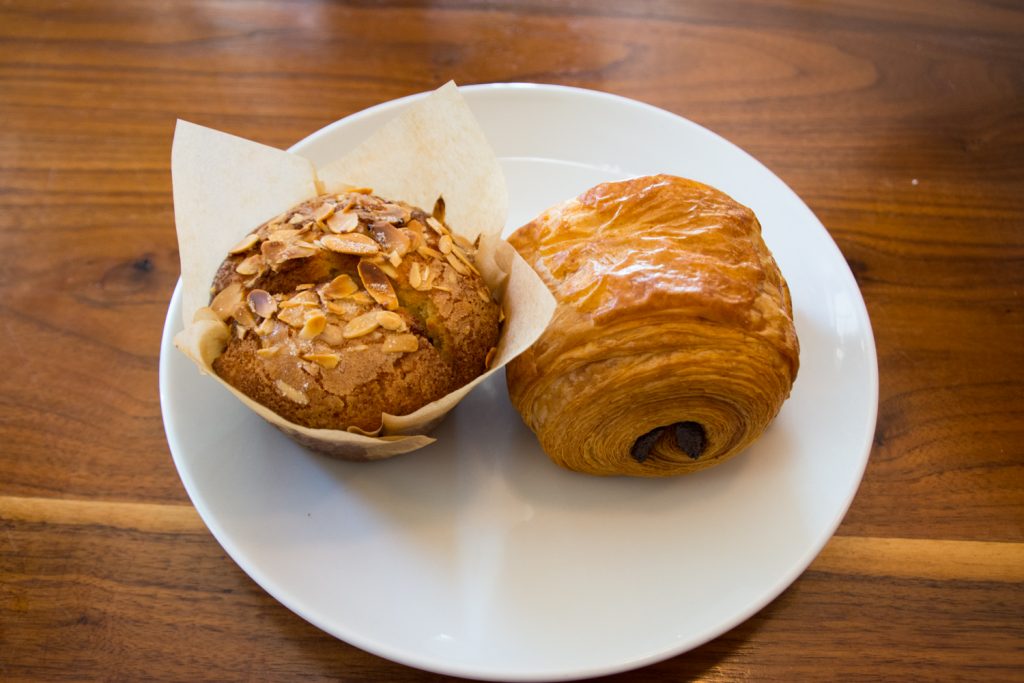 Stephanos, a native of Cyprus, attended college at the University of Bristol in the United Kingdom. He met Monica, his future wife, there where she was studying abroad via the University of Arkansas. Stephanos owned a music venue, Basement 45, in Bristol, United Kingdom.
“A different kind of retail,” Stephanos says, “but very much based on the quality of your product, working with passionate local people, musicians and promoters. Very, very key was customer service and working with a good team. That was my first business, which taught me a lot in my early years.”
Monica returned to the United Kingdom to complete a master’s degree in food anthropology in London. Stephanos was in Bristol and traveled frequently to London to be with Monica and spend time together in one of the most diverse and prestigious culinary cities in the world.
“We experienced all sorts of cuisines and concepts. It was fun to be able to visit her fairly regularly and just get on the bus or the underground and hit a neighborhood and just explore,” Stephanos said.
Stephanos and Monica’s time in the United Kingdom influenced them to eventually create a concept that married high-quality and sustainably sourced artisan pastries with a third-wave coffee experience, complete with a micro roastery in-house.
A lot of micro roasteries in the United States typically just focus on roasting coffee beans on a small scale to create an extremely fresh cup of coffee and there are many bakeries that just prepare and create gourmet pastries from scratch. Mylo Coffee co. is taking on the challenge of doing both and doing both extremely well. 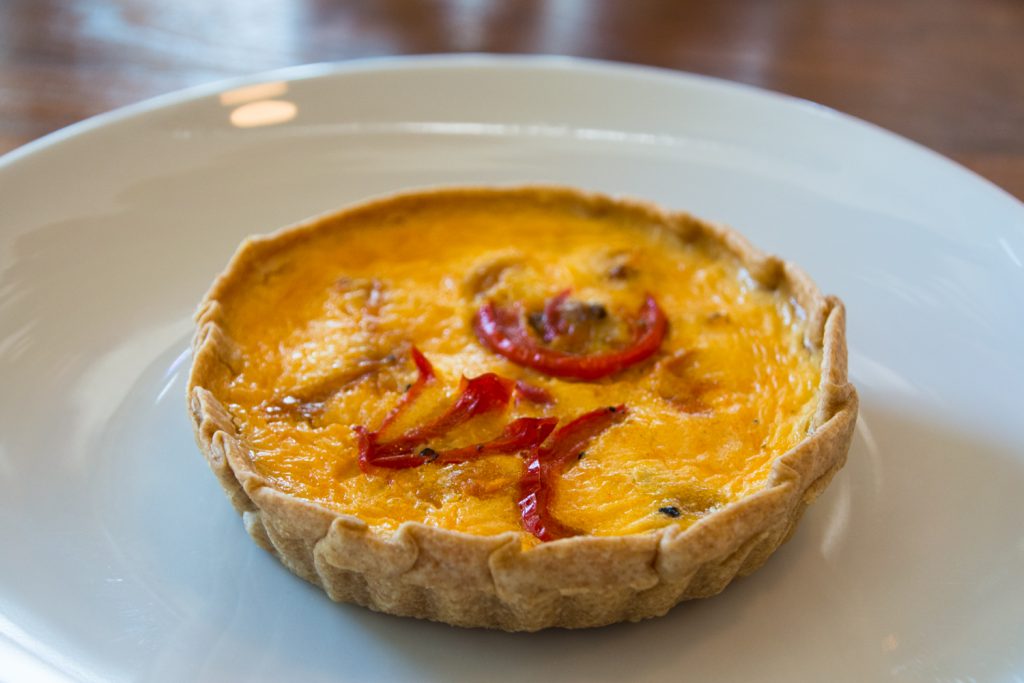 Stephanos and his team at Mylo Coffee Co. use, almost exclusively, locally sourced ingredients.
“There’s a wide diversity of raw ingredients we use, so some things you can’t get local. Some things you can find a company that deals in it, but then because they sell you a processed product, they may not necessarily be from Arkansas, but it’s regional,” Stephanos said.
Mylo Coffee Co. uses a wide range of local farmers, producers and growers who provide ingredients to create products at Mylo’s. In the early days of the company, before the coffee shop existed, Stephanos would set up the coffee cart at local farmers markets to sell pastries and coffees, a decision, which now pays dividends.
Stephanos built relationships while working alongside various producers at farmers markets, which makes his job much easier now.
If Stephanos needs any eggs, tomatoes, cucumbers, pecans, strawberries or some other seasonal fruit, he will give Barnhill Orchards a call and they will make a delivery. Mylo Coffee Co. has a contract for 250 pounds of strawberries this year, Stephanos says.

Blueberries, he says, are acquired from Wye Mountain. “It’s a you-pick-farm, but they have some excess some days and it comes to us,” he said.
“We are not just a restaurant calling up and saying, for example, ‘Hey, Mitchell, I need more Freckle Face pork.’ Or, ‘You don’t know me, but I’m opening this new and exciting concept and you need to buy more hogs, because whatever. It wasn’t like that,” Stephanos said. Stephanos knows these growers on a personal level from being alongside them at farmers markets.
After walking through the front of the shop, Stephanos walks through the kitchen and exits the shop through the back door, transitioning to an unattached facility, which stores flour, sugar, coffee, the coffee roaster and several extra refrigerator units.
“This facility we have here, as far as artisan small pastry production, I would go as far to say this is one of the best in the United States. In terms of your ability to keep it cool and separated from your heat source, and the fact that it has no windows, and the fact that it’s very controlled,” he says. The ability to have privacy and few distractions adds to the value of the facility.
Mylo Coffee Co. obtains all pork, sausage, bacon and ham from Mitchell Latture at Freckle Face Farm. You can find Freckle Face Farm pork in items like the Croissant, Quiche, bread pudding and many others. Grass-fed ground beef is typically brought in from Wholly Cow, the Romance, Ark.-based farm. Local, free-range chicken is purchased from the Grass Roots Cooperative. Lamb is occasionally used in some items at Mylo Coffee Co. and that is typically purchased from Cypress Valley. 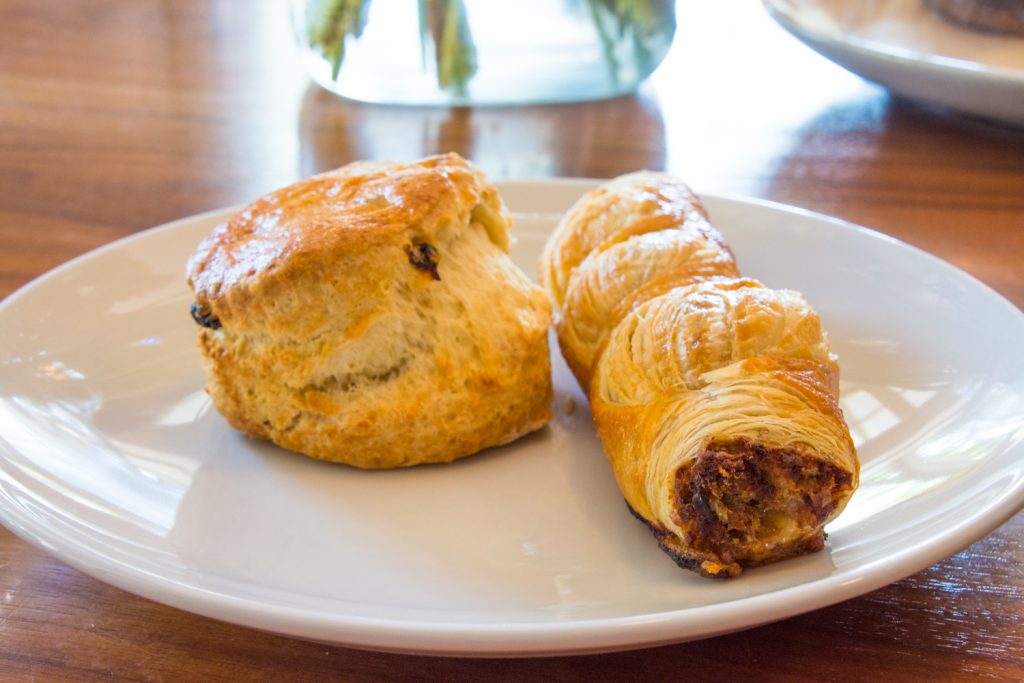 Perhaps one of the biggest and most important ingredients, rivaled only to coffee beans, is flour, grains and oats. Stephanos purchases those items from the War Eagle Mill in Rogers, Ark. Without these items from War Eagle Mill, the shop would not be able to open up because there would be no ingredients to create the pastries and brad items, Stephanos said.
“Our flour is exclusively War Eagle Mill. It comes to us dated, it’s milled fresh when we order it and we try to use it within one to two months,” he said. A variety of organic, non-GMO flours can be found in the facility, such as bread flour, whole wheat flour, thick rolled oats (which is used in granola recipes), all purpose flour, cornmeal and rice flour.
To the right of the extensive collection of flour is where Stephanos keeps 125 pound burlap bags of various coffee beans, stored on several flat pallets. Stephanos and his brother, Markos, work closely with an importer who will purchase beans from small estates or micro lots. 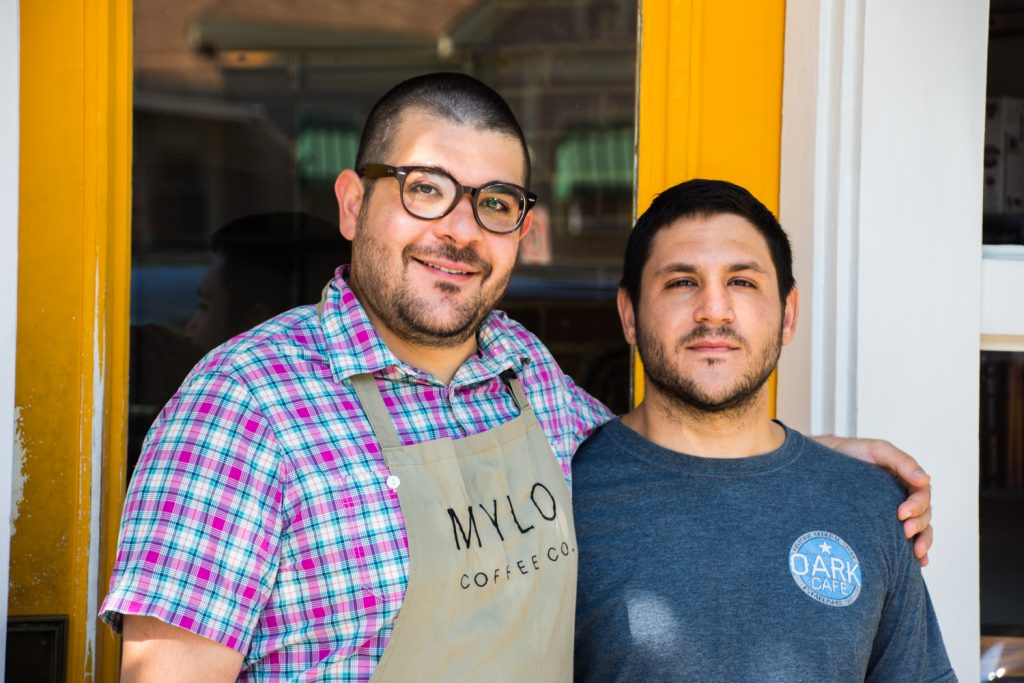 “The tricky thing is, you don’t buy [the coffee beans] on impulse,” Stephanos says. “You call the company and you ask for a sample, even if they price says it’s a good coffee and the Q grader says it’s a good coffee. If you don’t bring it to your facility and roast the small sample of it, it would be a mistake to contract that coffee, because you’re talking about thousands of dollars in investment. And that is something that we’re still learning, but we’re pretty good at it now,” he says.
Mylo Coffee Co. uses a coffee roaster from Diedrich Manufacturing, a company in which Stephanos describes as one of the best in the world.
“When you get a coffee bean, even if it’s from the same region, it’s not going to roast the same,” Stephanos says. “You gotta profile it, you gotta taste it, you gotta sample it, you gotta do all sorts of different things to make sure that each time you arrive at a result which your customer will appreciate.”
Coffee estates are similar to a winery. Wine grapes, grown at certain elevations, may produce an outstanding wine.
“Very much like wine, coffee, at a higher elevation, takes longer to mature,” Stephanos says. “It’s more dense and higher quality generally. Low-lying coffees tend to be spongier, they develop fast because there is no stress on the plant.” 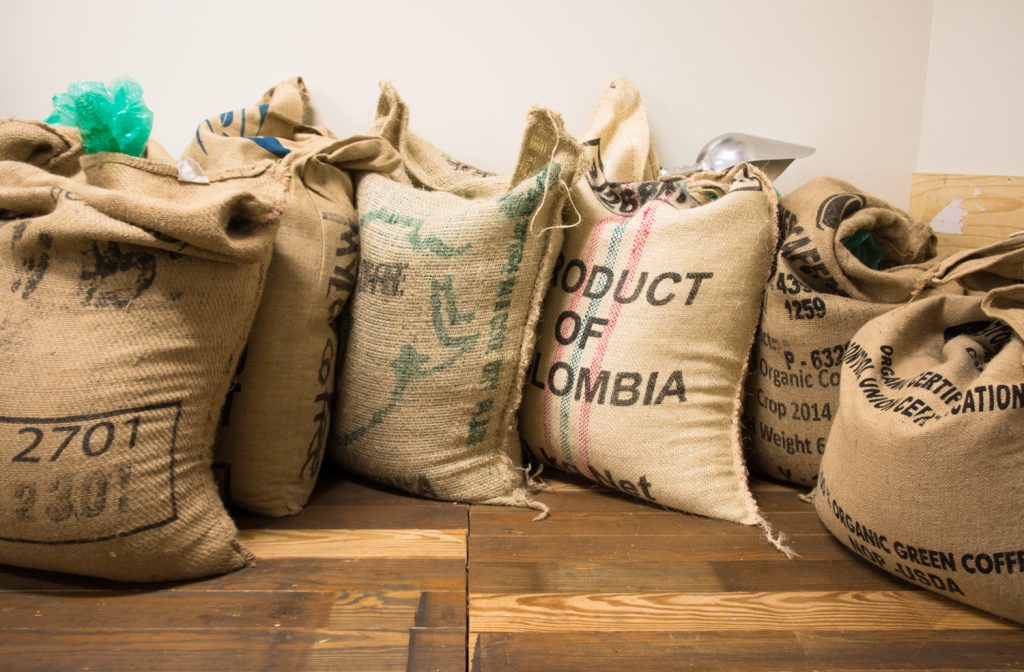 Once Stephanos receives the coffee beans and they are processed, Markos will roast them. When they are roasted, they pop like popcorn. Mylo Coffee co. goes through about 100-150 pounds of coffee per week.
Having the roaster on-site is an undisputed asset to the team at Mylo Coffee Co. Having the roaster on-site allows Markos to experiment and find the right balance between allowing the coffee to rest and sending it in to the store to be made into a cup of coffee.
“I can fine tune how much your coffee rests,” Markos explains. “For example, if I roast today, ideally, the best time for me to consume the coffee would go from 5 to 20 days, but this way, you can always roast in advance. It’s a fun kind of game to see that this coffee is 11 days old and the next day the same coffee tastes differently. So next time, I know that this coffee needs to rest 12 days,” Markos says.
“It’s a good to have an extra tool we can use that other places don’t have because they get their coffee from somebody who roasted it and they can’t play around with it that much. It’s a nice advantage [we have],” Markos says.
The experimentation and correcting any imperfections or mistakes is crucial to the business of Mylo Coffee Co., which processes a very large number of small transactions. A bad cup of coffee could equate to losing a customer.
“There’s no recovery,” Stephanos says of rescuing a customer who leaves with having a bad cup of coffee or a pastry.
“It’s not a three course, six course, seven course tasting menu meal where if you put a bad plate out there, you can recover with seven or eight other dishes. If your starter is lacking but your entrée and your dessert is good and the wine is good, then the customer leaves happy.  [We] are not like that. You’ve got one chance: a cup of coffee. And if it’s shit, you’ve failed,” Stephanos says. 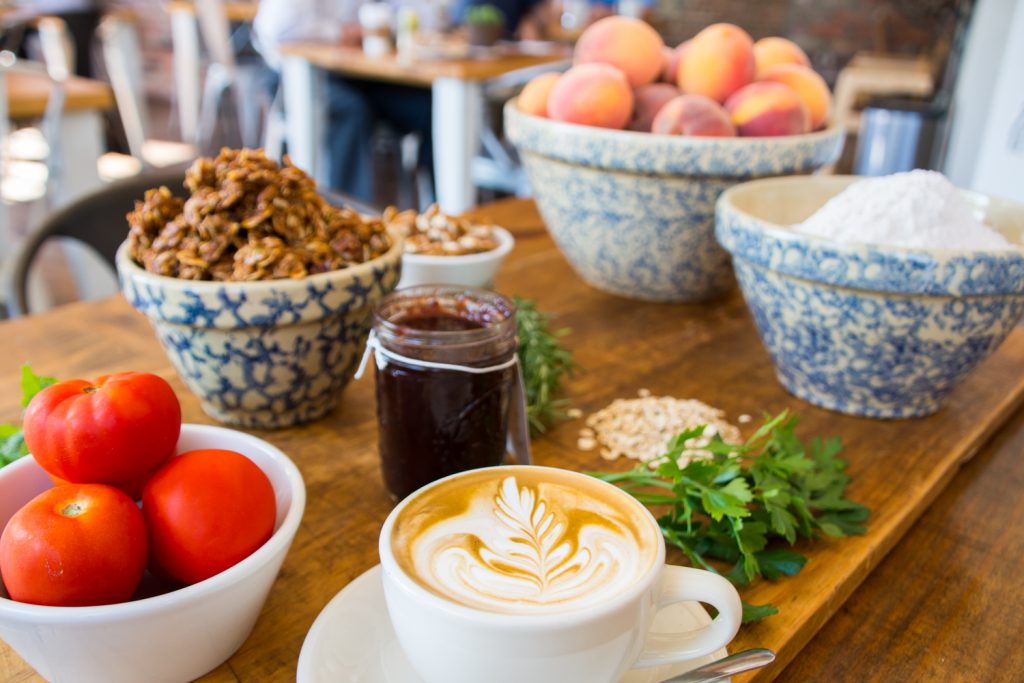 This is why Stephanos has decided to invest in a great espresso machine, the La Marzocco Strada EP, which was installed July 28. The machine, handmade in Florence, Italy can handle high-traffic, high temperatures and high-pressure demands. The new espresso machine will help remove some of the human errors in making a high-quality and consistently great cup of coffee.
Stephanos and Markos are looking forward to perfecting their coffee and baked goods. With the help of local growers and producers like Honeysuckle Lane Cheese (raw milk cheddar), White River Creamery (feta and other cheese), Little Rock Urban Farming (organic greens, organic tomatoes), Jerry’s Garden (pickles, pecans and greens), Rattle’s garden and North Pulaski Farms (seasonal produce), Mylo Coffee Co. will continue to create delicious, freshly baked artisan pastries.
Looking ahead, Stephanos says that he is excited about perfecting the lunch at Mylo Coffee Co. and exploring opportunities to have the coffee cart available for hire at various private events.
For those interested in hiring the services of the coffee cart, give the team at Mylo Coffee Co. a call or shoot them an email: (501) 747-1880 or info@mylocoffee.com.

Low Ivy Catering is Rolling out of Little Rock