I believe the technical term for this watermelon+peach cup from @elsurstreetfoodco is “Stupid Good”.
Always a good day for @cheesecakeonpoint. Easily our favorite dessert in town. Stop by tomorrow for their grand opening party.
Great dinner tonight from @eat_lilis. These quesabirria tacos are great.
These tuna poke nachos from @hillstationhillcrest are fantastic, you need to try them.
Monday is starting off slow around here, had to grab a bagel and coffee from @fidelandco to attempt to get going.
Check out these awesome cookies a friend shared from @austinscookies. They are delicious, and filled on the inside.
Ever since relocating operations to Cross St. in the Capitol neighborhood almost two years ago, Kent Walker’s Artisan Cheese has proved remarkably popular. While Walker’s wholesale business has always been reliable, it’s the reception of the tasting room that took Walker and his team by some surprise. So to handle the ever-growing crowd size, Kent Walker Artisan Cheese is making part of its cheesemaking room into expanded seating for walk-in visitors.
“I’ve been pleasantly surprised with how well the tasting room has been doing,” says Walker. “I figured that we’re a wholesale operation, the front of house, hopefully it would break even, maybe even make a little bit of money, but as it’s turned out, [the tasting room] has been a little profit center all on its own, enough to justify spending the money to triple the space.”
The former Diamond Bear brewery location offered Walker more than enough room to make and age cheeses. What was once a walk-in cooler is now a cheese cave, and the old brewing area went to a massive tub and cheesemaking equipment. But Walker soon discovered the space was out of balance. 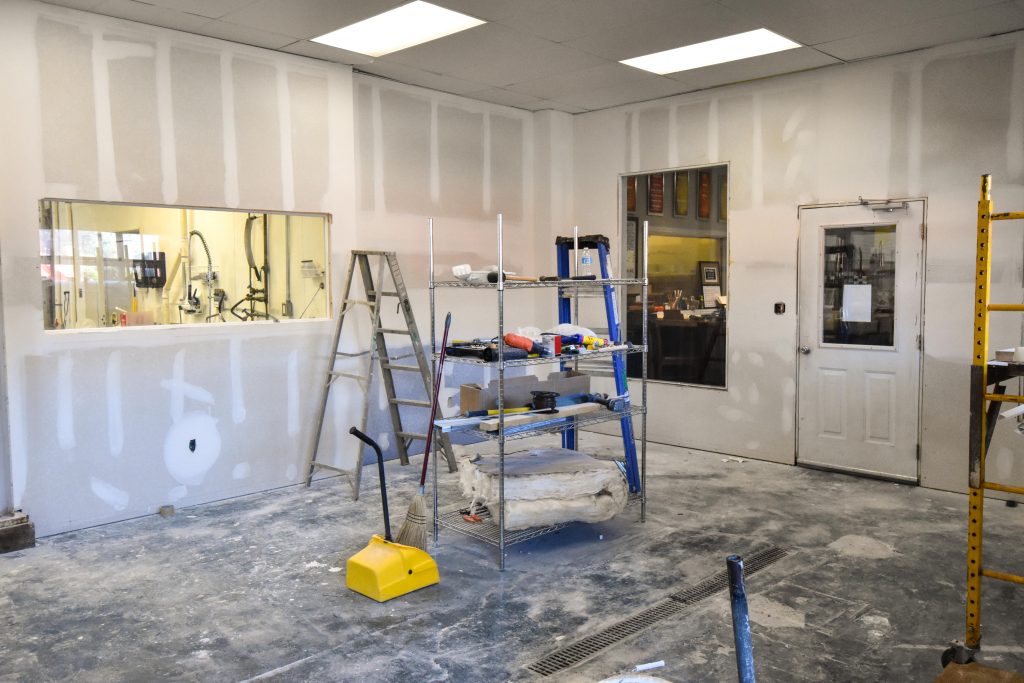 “Our make room was quite a bit stretched out, and it was a pain in the neck to walk around so much while making cheese,” says Walker.” “The new make room is smaller because the tasting room is taking over that.
“We really didn’t mind losing the space in the production room, but it was truly driven by our business out here. People in Little Rock have received us well, and we’ve just had times here, where people walk in the door, see the crowd and leave. Those are folks we’re not serving who we could be otherwise.”
The build-out of the new expansion is nearly done, with electric and drywall work still to complete. Kent Walker Artisan Cheese has chosen to complete the expansion in stages, paying for each step in full as the work progresses. However, when this next step is finished in a few days, the space will be ready to serve as a functional overflow room, even if paint and décor is not in place.
The added business has also led Walker to start a solid lunch service featuring his cheeses paired with local Arkansas products. The Bonta panini, for instance, uses a softer, melting cheese and the always good Bonta Toscana garlic sauce for a terrific grilled cheese sandwich. There are other sandwiches as well, and you can find salads that also incorporate Walker’s cheese, like a marinated feta on the Greek salad. And of course, look for the cheese flights, which can serve as an appetizer for two at lunch or a wonderful after-work treat paired with wine or local beer. Walker says lunch is just one of the ways he’s increasing his cheesemaking work.

“We have our regular cheeses, we have the new petit grés line, which is a rotating line where we’re doing a small batch and get to make something new each week,” says Walker. “Also, we’re starting to do an aging program and aging other folks cheese as well. It really helps the health of the aging cave to be full. The more full it is with cheese, the better the environment is for aging cheese in general.”
Walker has two events coming up that should be a blast. On Nov. 20, Kent Walker’s Artisan Cheese will host a pairing event with the new petit grés cheeses, which are French, soft-aged cheeses with shorter shelf life.. And on Dec. 3, the tasting room will hold a party for the Capitol lighting ceremony, featuring live music from country music artist Amelia White. Whether its in the evening or for lunch, Kent Walker’s Artisan Cheese is a fine destination, and a spot that gives Little Rock’s food scene another level of diversity and expertise.
[gview file=”http://www.rockcityeats.com/wp-content/uploads/2016/11/KWAC-menu-PDF.pdf”]