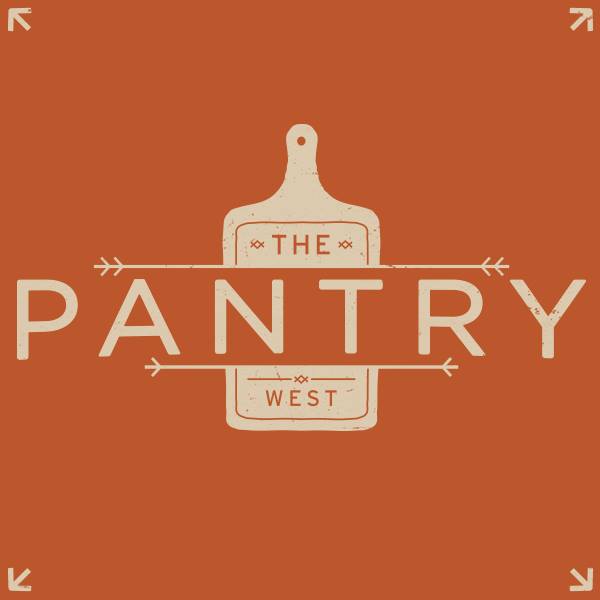 The Pantry and Pantry Crest are simply top notch examples of food, hospitality, and ambiance which makes it easy to overlook the equally impressive cocktail program that both locations share. The bar staff of David Timberlake who has been with the Pantry for over a decade and is the bar manager at Pantry, Mal Calaway, Darren “Tex” Houston who is the bar manager for Pantry Crest, and Kelsey Seiter all pitch in to create the menus. The new menu at The Pantry & Pantry Crest showcase a diverse set of talents using a variety of spirits that continues the unique and fulfilling experiences you find there. 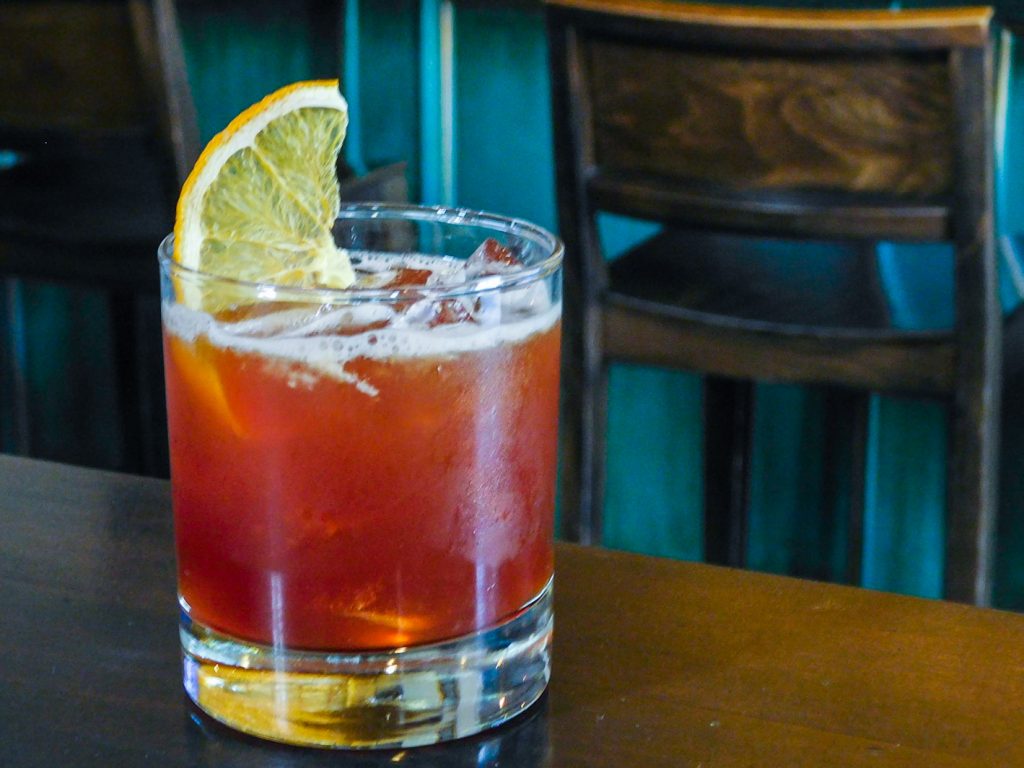 Deserts of Bohemia
(Sotol, Cherry Heering, China-China, lemon juice, & orange bitters)
David’s favorite drink on the new menu is a complex and rewarding drink that uses the agave spirit Sotol alongside the bittering and herbaceous notes of the orange aperitivo China-China, and the sweetness of the Cherry Heering. The cherry is definitely strong on the nose of the drink but the sip provides a combination of herbal and floral notes before finishing with a pleasant bitterness from China-China. The drink is bright but rich in complexity, providing a beverage that will pair well with the Pantry’s Czech and Eastern European fare or on its own at the bar. 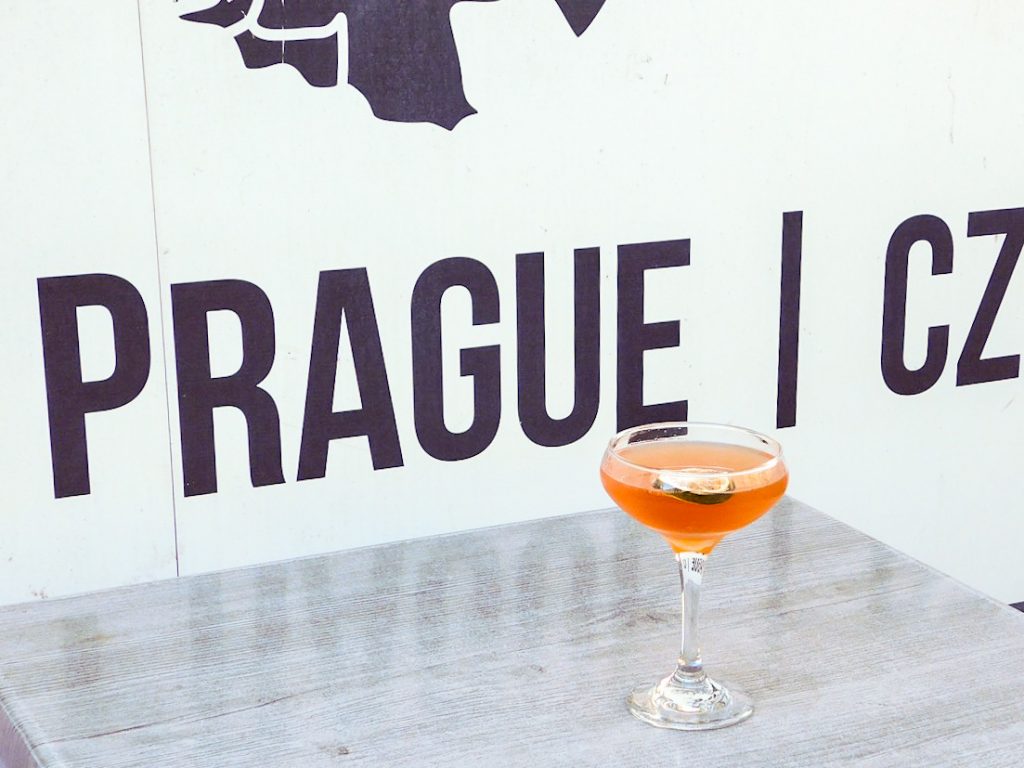 Fancy Pants
(Mezcal, Amaro Nonino, Cocchi Torino, Luxardo Maraschino, Lime Juice, & Peychaud’s Bitters)
Darren’s handiwork is prominent in the Fancy Pants which provides a unique combination of flavors for the Pantry and Pants Crest’s cocktail menus. Also using agave prominently, the Fancy Pants has a strong smokey nose and quickly coats the palette as you drink. Instead of brightness, this cocktail provides a vegetal note that really makes this cocktail feel earthy and appropriate for the cooler weather. The hint of aging shows as the sip lingers letting the smoke ever so slightly even out the drink waking you up just enough to come back for more. 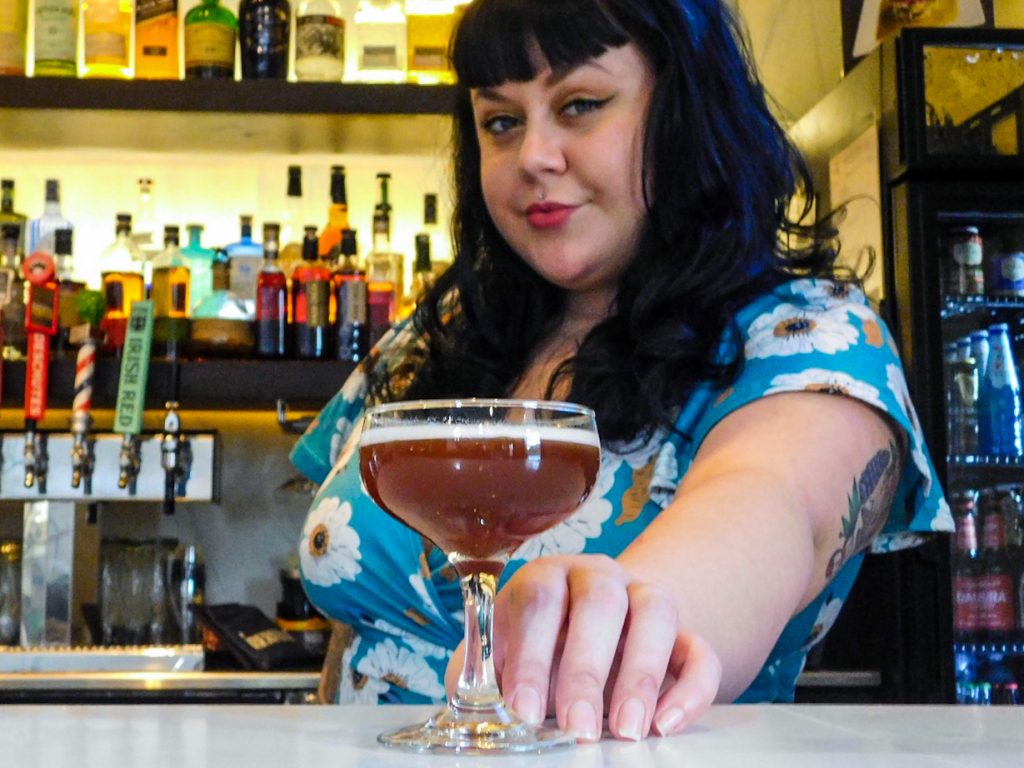 Rock Island Line
(Oak & Eden Bourbon, Olorosso Sherry, Raspberry Coffee syrup, & Angostura Bitters)
The Rock Island line is the most intensely flavored cocktail on this menu but does it with a surprisingly light body. There is a fruity and salty quality that comes out as the raspberry coffee syrup gives a fruity component that highlight’s the sherry’s skillful use. The Oak & Eden Bourbon has a stave in the bottle providing some additional maturation to help the Rock Island Line carry such a strong flavor profile. This is like a dark chocolate dessert full of flavors to appreciate that you may have passed over when younger. 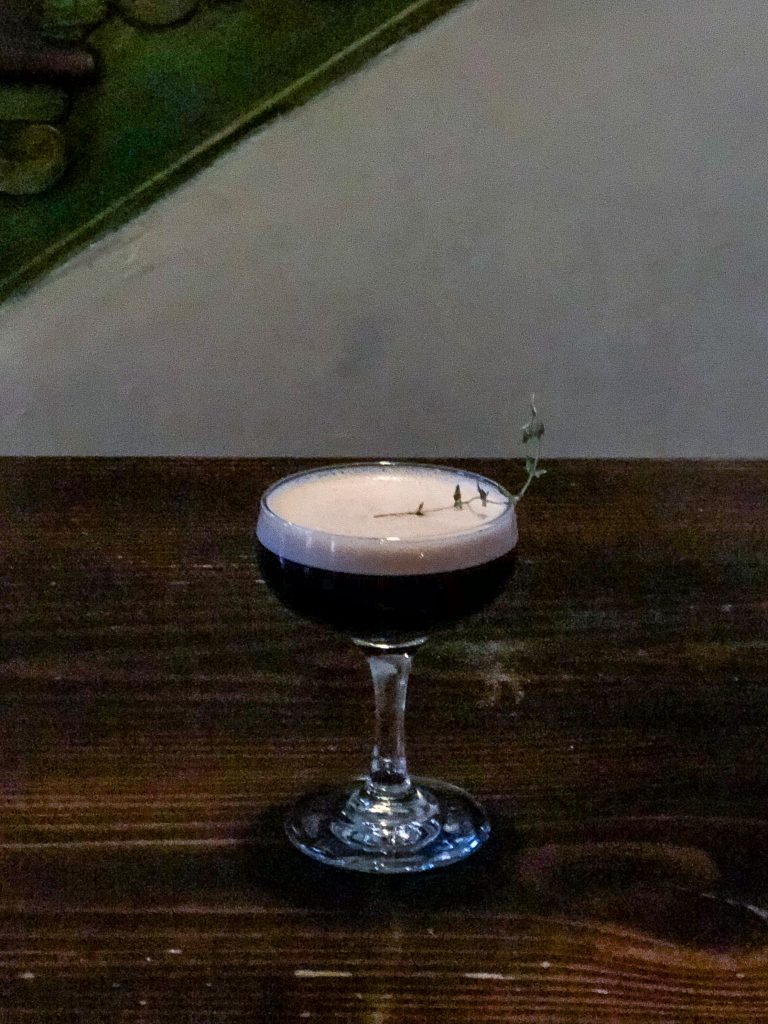 Black Sparrow
(Orange Tea Infused Scotch, Marionberry Liqueur, Allspice Dram, & Lemon Juice)
Mal’s handiwork on this menu is a refined and sophisticated drink that begs you to longer over it in the long fall evenings. The tea infused into the scotch is strong on the nose but the scotch itself is restrained in the drink lending character and some aging notes without overwhelming the drink. The berry flavors begin to appear in the middle of your sip and deepening as the Allspice Dram quietly knocks on your taste buds for more attention. A remarkable balance of flavors. 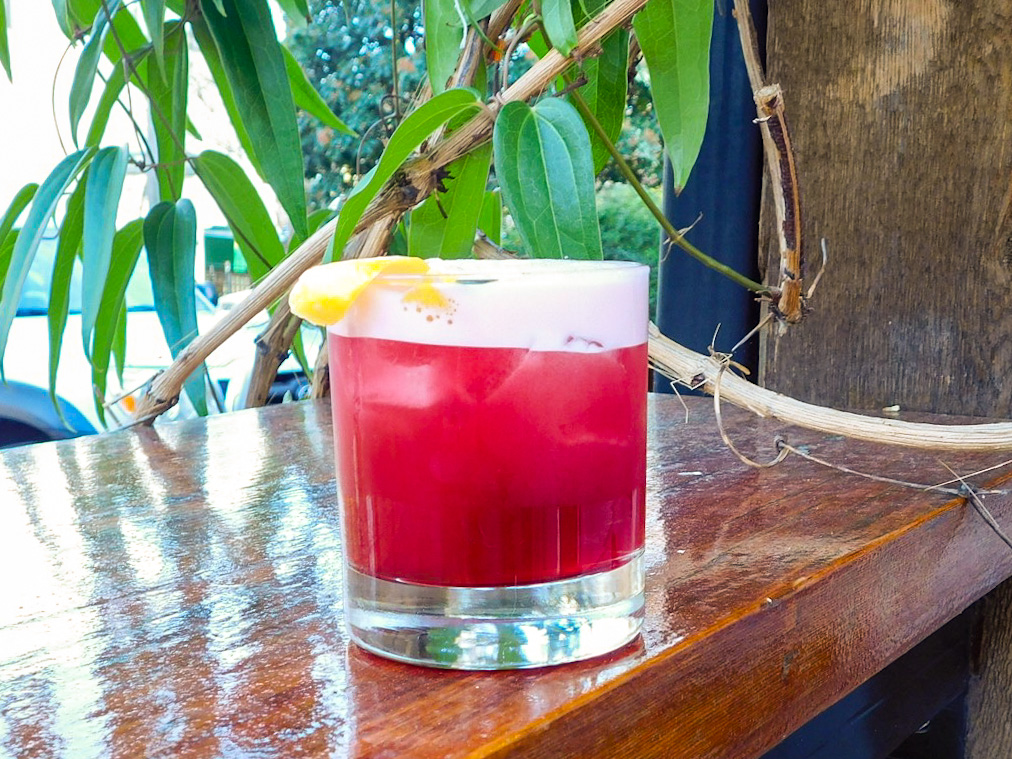 Czech Engine
(Gin, Becherovka, Amaro Nonino, & grapefruit hibiscus syrup)
Every iteration of the Pantry and Pantry Crest cocktail menu has a drink using Becherovka, in honor of the Eastern European heritage on display – the Czech engine is a masterful example of how to use fall or winter flavors in a light, bright, and refreshing way. The earthy and tart Czech Engine uses the becherovka for those fall baking spice notes and the amaro nonino for a nutty rounded flavor while the grapefruit hibiscus syrup provides not only the vibrant color but also a more upbeat character. The flavors linger on the tongue like the last rays of an autumnal sunset, asking for one more sip. 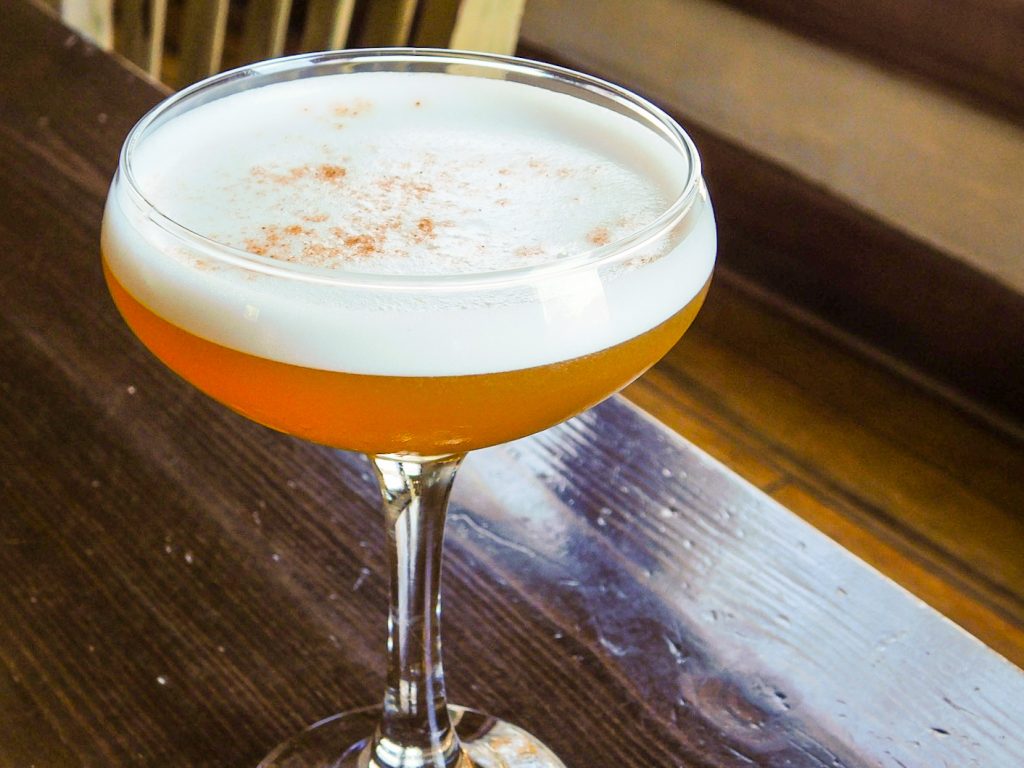 One-Eyed Jack
(Evan Williams Bourbon, Espelette Pepper Liqueur, Honey, Peach shrub, Lemon Juice, & Orange Bitters)
The cayenne pepper garnish is the not so hidden secret of this cocktail. It provides a spicy and almost cinnamon intoned nose that gives way to a sweet heat. The honey combines with the bourbon to give it that sense of sweetness while the peach shrub combines acid and fruit to soften the drink overall. The slight vegetal sweetness of the peppers may even come out if you let it linger. This cocktail has all the best notes of a good barbecue sauce – heat, sweet, acid, and fruit – but in a beautiful cocktail. A little off menu modification can be made for fans of spicier food by asking for it to made hotter.

Joel DiPippa is a local food and drink aficionado and freelance writer with Eat Arkansas, Treatsie, Southern Ash, and more.