When The Grumpy Rabbit opened mid-pandemic last year it brought an interesting element to Lonoke by focusing on higher end cuisine and delivering an experience that most locals previously had to make the 30 minute drive to Little Rock to get. Part of making the idea come together was hiring well known chef James Hale to open the kitchen.

One of chef Hale’s first hires was EJ Turner, the East St Louis native who spent time at Ristorante Capeo after finishing culinary school at Pulaski Tech. Now with Hale departing for Allsopp and Chapple it will be Turner taking over the daytime executive duties at Grumpy Rabbit (Kyle Carson will step up to the PM chef position). It is a role that is a natural fit for Turner.

”EJ loves soul food, but has a fine dining background that he can lean on,” chef Hale says. “It is a really diverse skill set that works great with this restaurant.”

Turner’s journey to an executive chef was not a traditional one. Growing up in East St. Louis Turner admits that he had a rough upbringing, but found a drive to build a better life after meeting his future wife and the birth of their son, that ultimately led him to central Arkansas. “I never had unconditional love until they gave it to me,” Turner explains.

It was his wife who pushed him to go to culinary school, seeing his love of cooking and working to connect with people over food. After culinary school he worked at a few places, including Capeo, before coming to the Grumpy Rabbit shortly after opening.

It is a spot that quickly became a natural fit, giving Turner a spot to expand on his love of soul food and elevate it in a fine dining environment. During his time he has started putting together weekly specials as well as working lunch and brunch services. He is also working on an upcoming Juneteenth special Soul Food dinner on the 21st and 22nd of June. The dinner will be a fine dining twist on traditional soul food including black eyed pea salad, orange soda collard greens, jerk pork spareribs, and bread pudding.

It is the care that Turner puts into keeping higher end dining approachable and elevating classic dishes that makes him a natural fit to step up to a bigger role at The Grump Rabbit. He says that he wants to build on the success that they created in the first year, and that there are a few areas he hopes to grow and improve on.

“For our brunch menu, first thing I want to add a couple new meat items to get a little pressure off my grill guy,” Turner says. “I am also looking to add a chicken fried steak special, some slow cooked green beans, fried green tomatoes, and hopefully a catfish special.”

Turner says the mentorship from Chef Hale has helped him grow as a chef, although Hale is quick to point out that he has grown as a chef thanks to working with Turner.

“I learned about attitude and not letting things get to me from EJ,” Hale says. “Sometimes I tend to harbor, he taught me to go ahead and talk about it and move on.”

Turner can be found in the kitchen during the week for lunch and during brunch service. He also wants to spend some free time working on a food truck concept, Daylene’s (named after his kids with his grandmother), that focuses on family style soul food which he hopes to open next year. 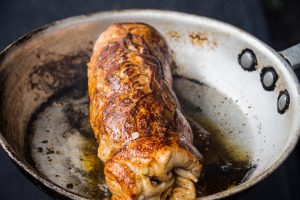 May 16, 2022
Change Location
Find awesome listings near you!