About to up our food photography game around here a bit with this new #macro lens. Expect some cool photos coming soon.
Skipping out of town for the night. @barcleeta is one of our favorite spots in the state. Check them out next time in NWA.
I believe the technical term for this watermelon+peach cup from @elsurstreetfoodco is “Stupid Good”.
Always a good day for @cheesecakeonpoint. Easily our favorite dessert in town. Stop by tomorrow for their grand opening party.
Great dinner tonight from @eat_lilis. These quesabirria tacos are great.
These tuna poke nachos from @hillstationhillcrest are fantastic, you need to try them.

Little Rock’s food and beer scene gets plenty of attention, and deservedly so. But while a small handful of restaurants and breweries here get some national attention, only one has garnered not only international recognition, but acclaim. Over the past few years, Rock Town Distillery has amassed several global honors, not the least of which was being named “U.S. Micro Whisky of the Year” in the 2015 Jim Murray’s Whiskey Bible. Murray has not forgotten Little Rock, and in his 2017 whiskey guide, has recognized two Rock Town spirits as being worthy of some of his highest praise.
First, a little background on Murray, one of the most read and respected whiskey reviewers in the world. For the past 16 years, Murray has tasted and reviewed more than a thousand whiskeys each year from around the world. Each year’s Whiskey Bible contains reviews of more than 4,000 whiskeys, complete with tasting notes and comments on the nose, taste, finish and balance of the spirit. Each whiskey is graded on a 100-point scale, and so far, Murray has never given out a score higher than a 98. The Rock Town bourbon that won the 2015 honors for best U.S. micro-distiller whiskey was scored at a 96.5, with Murray commenting that it was “unquestionably one of the great microdistillery bourbons of all time.”
For 2017, Murray scored Rock Town Distillery’s Barley Bourbon a 95, saying in part “Totally magnificent. You can stop all the other whiskeys you do now and just concentrate on perfecting this stunner … The bite, the extraordinary dispersal of crisp sugars, the mouth-watering qualities, the spices, the chocolate…fabulous!” Rock Town’s master distiller Phil Brandon was obviously gleeful at the review.


“This is a bourbon whiskey that we’ve been experimenting with the flavor grain, which is the middle grain between the corn and the malted barley,” says Brandon. “So for this one, we used unmalted barley. So it’s a different spin on bourbon.”
As good as the barley bourbon is, Murray was even more impressed with the Arkansas rye whiskey, awarding it a 95.5, just half a point short of again claiming the U.S. Micro Whisky of the Year honor. Murray was emphatic, if crass, in his assessment: “The nose will give any rye lover a serious hard on, as the effect of the grain is entirely maxed out, leaving the sugars to fill in the cracks only. The delivery, likewise, is so full of that grain’s unique fruity character, one can only swoon. Brilliant!” Brandon was especially pleased here, noting that Murray picked up on the work his team did on this rye.
“We changed our mashbill a couple of years ago on the rye,” says Brandon. “This year we got a gold medal on it, and now a 95.5. So we’re very proud of these ratings. Our team has done a great job putting all of this together.”

While these two earned Murray’s highest marks, it was far from Rock Town’s only good showings. A total of six whiskeys scored at least a 92 this time around. And you can expect more from Brandon in the coming years. The sorghum bourbon is Rock Town’s other flavor grain series spirit available now, and more are in barrels, including peated malt, chocolate malt and Golden Promise (an older malted barley).
“That hard work is starting to show. Is it luck or skill? Is it our geography, where we are in the world, our climate, our water? I think all of that goes into it, but at the end of the day, we had to figure out how to get the best whiskey out of our still. We practiced, we worked, and we’re figuring it out.” 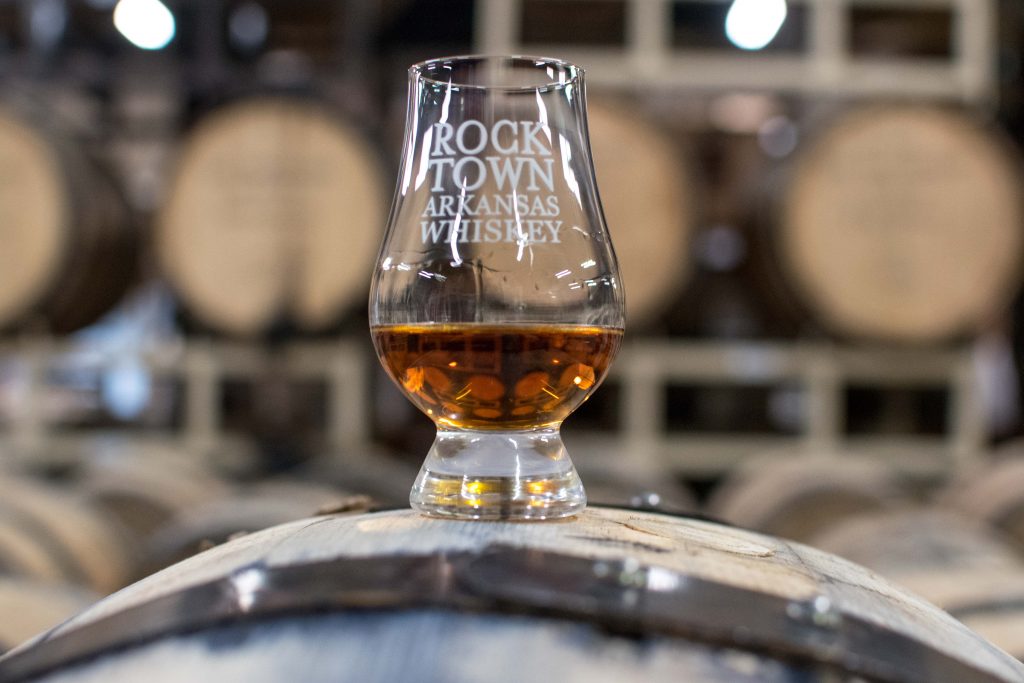 If you want to taste some of the world’s best whiskey, you only need to get to your area liquor store. The rye whiskey is Rock Town’s standard issue, meaning it can be found easily in Arkansas and other parts of the country for $39.99. The barley bourbon, however, can only be found at the distillery on 6th Street. That’s right, one of the finest bourbons of the year anywhere in the world is just for Arkansas to enjoy. There are only 60 cases available at $39.99 for a bottle, so don’t wait long to stop by the distillery and pick one up.