Jerky’s Spicy Chicken and More has had a rough few months getting the new Center Street location open. Several problems with the building delayed the restaurant’s opening significantly, and now Jerky’s is closed again. Owner John Walker Jr. posted on Facebook that Jerky’s is in a dispute with Rental Realty, which owns the building, over maintenance agreements on the building to keep it up to code on the part of the owner. The restaurant is still closed while the two sides work out their differences. We will update you on this story as we find out more.
It was announced a little while back, but the city’s biggest annual food festival has its date set. The 2016 Arkansas Greek Food Festival will be held May 20–22. This is the 32nd year for the festival, which regularly draws more than 10,000 people to the Annunciation Greek Orthodox Church. In addition to serving up Greek food classics, the festival features arts, crafts and ethnic dance routines from around the world.
If you take a look outside right now, you can see the miserable weather that forced tonight’s Westover Wednesday food truck meet to be postponed. The trucks will now convene a week from today for the Westover Wednesday Marketplace, which will bring vendors and live music to the party in addition to the trucks. Rarely seen Waffle Wagon is slated to be there, as are popular trucks Katmandu Momo, Beast, Hot Rod Wieners, Kincaid’s Coffee and more.
Mylo Coffee Co. has announced expanded hours at its Hillcrest location. Mylo is now open seven days a week, from 7 a.m. until 9 p.m. Monday through Saturday, and 7 a.m. until 7 p.m. on Sunday. Mylo has also added some new coffee beans to its lineup recently, including two from Costa Rica and a Guatemalan variety.
Loblolly has released its new spring menu, which is great. Even better? Its adding ice cream flights to the menu. Check out our look at the SoMa dessert shop’s newest additions.
There are very few bars in Little Rock that can measure up to the work being done by head barman David Burnette at South on Main. Here, he gives us an insider’s look at his latest creation, The Good Christian.
More than a thousand of you cast votes in our annual poll on the best restaurant service in Little Rock. See the full rundown of winners here.
And if you’re looking for a good steak dish in the city, we’ve got you covered. Rock City Eats’ writers have their favorites for you to try.

March 10th Tiki Night at Trio’s – Trio’s Restaurant will host Tiki night featuring craft Tiki cocktails,pupus and other island themed treats, special musical guests and prizes for most fun costumes. Cost will be $35 and will require reservations in the Trio’s Pavilion from 6 p.m. until 9 p.m. Call 501-221-3330 for tickets
March 12 Argenta Irish Festival – The inaugural 2016 Argenta Irish Festival at Argenta Plaza at 520 Main Street at the finish of the annual St. Patricks Day parade in North Little Rock. The free festival will have a Kid Zone with arts and crafts, Food Trucks, Live Music, and a Beer Garden featuring local brews from Lost Forty Brewing, Stone’s Throw Brewing, Diamond Bear Brewing Company, Flyway Brewing, Damgoode Brews, and Bubba Brew’s Brewing Company.
March 12th ICSA St. Patrick’s Day Parade/Dugan’s Block Party – Beginning at 1 p.m., enjoy the 17th annual St. Patrick’s Day parade, sponsored by the Irish Cultural Society of Arkansas. The Dugan’s block party will follow immediately afterward.
March 15th Rock City Tailgate at Gary Hogan Field – We are gathering some of Little Rock’s finest food trucks to watch the Little Rock Trojans take on the UCA Bears in baseball. Come eat some great food, then grab tickets to see the Trojans take on the Bears.
March 16th Three Brisket Dinner – We are partnering with Lost Forty with Lost Forty Brewing for a unique brisket and beer dinner. The dinner features three different styles of briskets from chefs Matt Bell, Ken Dempsey and Scott McGehee.
March 17th St. Patty’s Day Pairing at Kent Walker Artisan Cheese – Come taste the pairings of Kent Walker’s Cheese with Moody Brews beer! Tickets are now available for the 5 p.m. and 7:30 p.m. tastings
March 18th At the Corner’s First Birthday – Downtown diner At the Corner is celebrating its first full year in business. The birthday party goes from 5 p.m. until 7 p.m. and includes drink specials and tapas.
March 22nd Raptor Ridge Wine Dinner at South on Main – This dinner will feature four courses paired with California’s Raptor Ridge wines. Come and meet assistant winemaker Kevin Wiles. Tickets are $75 each. Make your reservation by emailing amy@southonmain.com.
April 1st 19th Annual Food & Foam Fest – Annually one of the state’s best beer festivals, this year’s Food & Foam Fest will feature samplings from 350 craft beers from Arkansas and around the country. Tickets are already on sale.
April 2nd 8th Annual B Street Rib Off – This fantastic competition will be the biggest yet, with all proceeds going to the American Cancer Society of Central Arkansas. There is still time to enter, although space is going quick. This year will also feature food trucks, entertainment, and more.
April 2nd Inaugural PK Grills Steak Cook-Off – The event is open to anybody with a PK Grill, steak and $89 for the entry fee. Space is limited, be sure to reserve your spot in the competition soon.
April 7–10 Fantastic Cinema and Craft Beer Festival – This festival celebrates independently made genre films and craft beer from Arkansas and beyond. The event is at Riverdale 10 Cinemas. Tickets and VIP passes are on sale here.
April 16th Any Excuse to Party at Kent Walker Artisan Cheese – The folks at Kent Walker Artisan Cheese wanted to throw a party, no reason needed. The party features Bob Livingston playing some sweet tunes, food from The Southern Gourmasian, Hot Rod Wieners, Katmandu MoMo, & Loblolly Creamery, and a number of local craft beers. 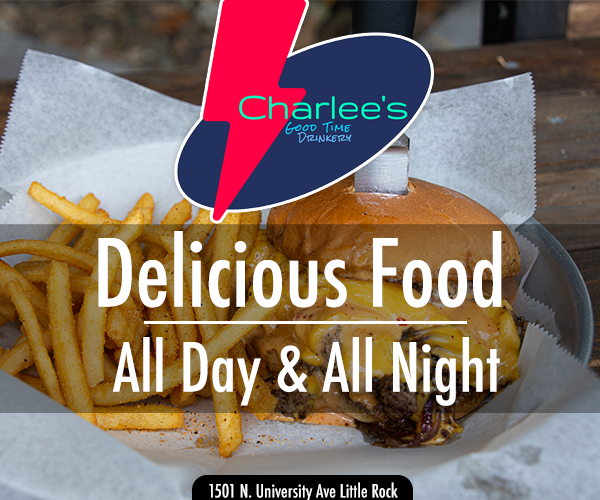 There are crawfish special all over town this month. Find them at The Faded Rose (Wednesdays), K Hall and Sons Produce (Saturdays) and Lulu’s Crab Boil (all week).